Let’s say it costs your favorite coffee chain spends $10 to make ten cups of coffee. It might, however, cost them 90 cents to make an additional cup of coffee, since part of their cost is being spread over more units. For example, they might be able to cut labor costs or buy their coffee beans in bulk. The additional cost of the eleventh unit — the eleventh cup of coffee — is known as the marginal cost. The fact that production costs often decrease as the number of units produced increases can often explain why prices are lower at bulk stores like Costco than smaller independent grocery stores.

Marginal costs are determined by the cost of production, which is made up of both fixed costs and variable costs. Fixed costs do not usually fluctuate depending on the number of units being produced, so whether your coffee chain makes ten or twenty cups of coffee, their fixed costs will stay the same. These can include rent, the price of electricity to run the coffee shop, or the salaries of the baristas. Variable costs, on the other hand, will change depending on the number of units being produced. Whilst the stores will have to pay rent and utilities even if they don’t produce any coffee, they will only have to pay for coffee beans, milk, and cups if they are producing cups of coffee. Variable costs can include labor, packaging costs, and raw materials.1

Economies of Scale: This term describes the fact that as the scale of production increases, businesses will usually benefit from lower costs.3 As fixed costs usually stay the same regardless of how many units are being produced, the more units a business produces, the more profit they can make.

Diseconomies of Scale: Most of the time, increased scale means decreased costs, but there comes a point where production becomes less efficient the more it grows, which results in increased costs.4 Some factors that contribute to increased costs can be employee burnout, a need for expensive equipment to keep up with production, or the need to hire an additional employee. Once we reach a point where producing a unit costs more than that unit can sell for, companies should stop making additional units.

Marginal Revenue: The amount of money a company makes from selling an additional unit.

Marginal Utility: The added satisfaction that a consumer derives from purchasing an additional unit.5 For example, it can be the additional pleasure a customer would feel if they purchased two donuts instead of one. Being aware of marginal utility can push customers to purchase more units and can inform companies whether the marginal costs of an additional unit are worth it.

Marginal Cost Analysis: An examination of the added benefits of producing an additional unit (revenue) compared to the additional costs.6 Marginal analyses should be used to determine the optimal number of units companies should produce to make the greatest profit. When it comes to marginal costs, the graph will be similar to the one on the right.6 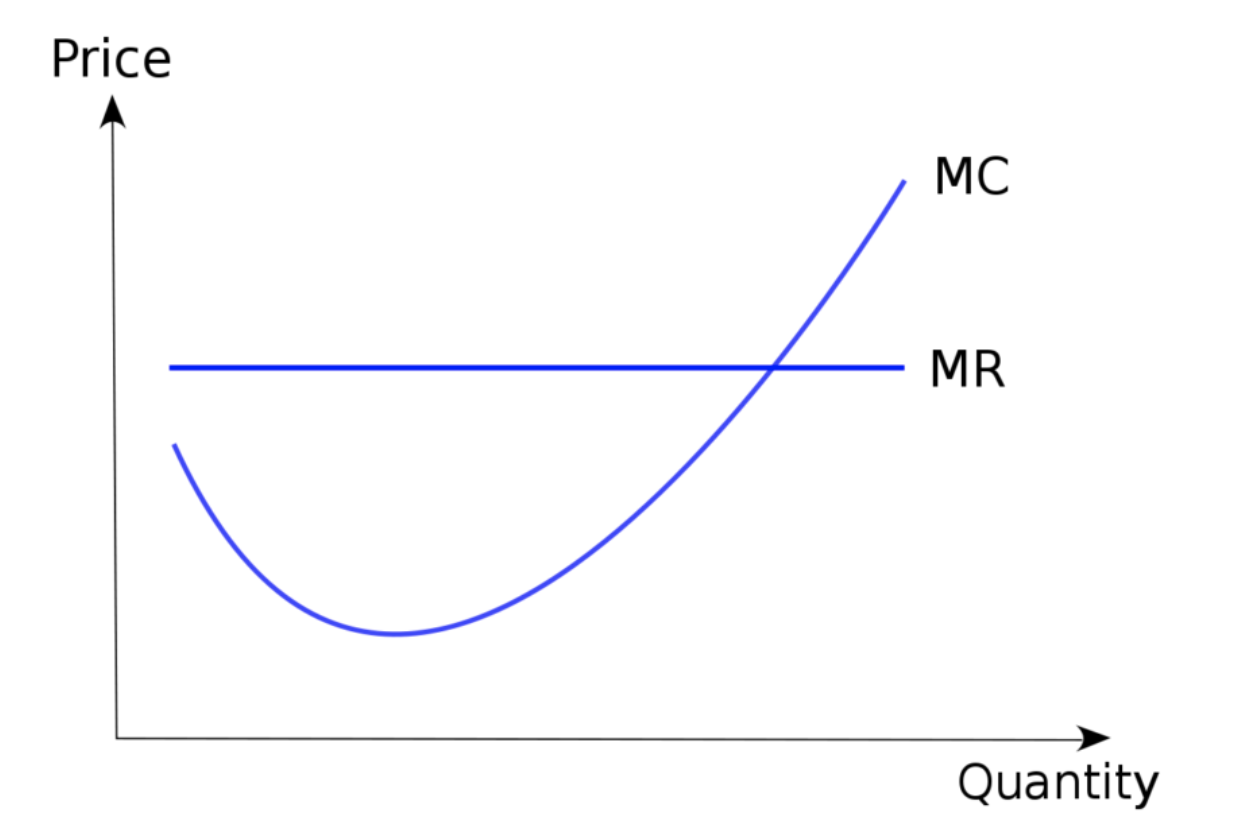 Marginal costs are plotted against marginal revenue to determine the optimum quantity of produced units.

Profit Maximization: By plotting marginal cost and revenue, companies can find out for which quantity of units produced the costs will be equal to the revenue. By producing that quantity of units, the company will maximize their profits, since any additional unit will incur a negative profit.

Marginal Cost Pricing: A choice to set the price of a product to equal the marginal cost of producing the extra unit. Businesses might choose to do this during periods of low demand to focus on breaking even instead of making a profit. Marginal cost pricing does not take into account fixed costs. 7

In 1970, Alfred E. Kahn, a distinguished figure in economics, published the first volume of his two-volume series, The Economics of Regulation. Kahn spent the better portion of his career becoming an expert in regulation and deregulation.8 Regulation and deregulation has to do with how much government interference there is when it comes to companies determining what price they can sell their goods at. If the government has a cap on the prices in a market, as is often the case with the hydro industry for example, then businesses need to ensure their marginal costs remain below that price.

In The Economics of Regulation, Kahn suggested that marginal cost pricing would ensure economic efficiency of utilities without regulation. Utilities tend to be in short or limited supply, which means that governments need to find ways to stretch out that supply by rationing it. According to Kahn, the way that it should be rationed is by raising the prices. By doing so, those who want the resource the most will obtain it, as they will be the ones that are willing to pay for it.8

Essentially, if demand is going above the reasonable supply, then those consumers who have increased demand should have to pay more for it. That is because the marginal cost becomes exponentially large. While everyone might get a base level of electricity, if they want more than their ration, then they should be forced to pay as much as it will cost to use it. According to Kahn, marginal cost pricing will allow “society’s limited resources [to be used] in such a way as to maximize consumer satisfactions.” 9

Kahn believed this was an efficient business model as it encourages conservation and preserves the freedom of choice. For those people who don’t value the resource that much, the higher cost will deter them, but those that do value it — in theory — will have the means to purchase it. His economic insight was hugely influential, and led to the New York Public Service Commission to use marginal cost pricing for electricity in 1975.8

Electricity wasn’t the only area that Kahn’s marginal cost theory influenced. Once the airline industry was deregulated, they too incorporated marginal cost pricing into their business model. That is why if a flight is very full, the price of a seat increases. Today, a very similar model governs surge pricing for ride-sharing services and highway tolls.8

Figuring out marginal costs is an incredibly important component of running a successful business. You have to spend money to make money, but companies want to ensure that what they are spending does not go beyond what they are able to make. For any business, there is a ‘sweet spot’ – a perfect quantity of units that will ensure every unit is returning a profit. If that quantity is too low, the business isn’t making as much as they could, and if it’s too high, they are losing money on additional units.

Marginal costs can also fluctuate, which means that marginal cost analysis should be undertaken on a regular basis. It might be that the cost of supplies increases, which requires more units to be produced to be profitable, or that the minimum wage increases, which would make the costs of hiring additional employees outweigh the advantages.

According to the world-renowned innovation expert Clayton M. Christensen, focusing on marginal costs is not the best way forward for companies. He suggests that when companies obsess over their marginal costs, they tend to forget to properly calculate the overall cost of production, which can lead to failure.10

In his 2012 book How Will You Measure Your Life? Christensen uses Blockbuster as an example of a company that failed due to their focus on marginal costs. Blockbuster was the dominating movie rental company in the 1990s which allowed the company to invest in inventory for the stores. The fixed cost of a company like Blockbuster made up the majority of its costs; rent, salary, and the cost of electricity remained the same regardless of whether people were renting movies.

For Blockbuster, the marginal costs of owning an additional movie were very low — all they had to do was pay the price of the DVD. The only way to make money was therefore to rent out a lot of movies and have them be returned quickly in order to be rented out again. However, Blockbuster found that people liked to keep movies for a few days and did not return them at a fast enough rate for them to generate profit. In order to increase revenue, Blockbuster then decided to increase the “late fees” so much that 70% of their overall revenue was coming from this source.10

Blockbuster’s model was all about marginal costs and marginal revenue. They were focused on trying to make money from being able to rent out movies more frequently and more often. Alternatively, Netflix emerged with a different business model: one which asked customers to pay a monthly fee, which meant that it didn’t matter how many movies they watched. This monthly fee ensures that Netflix is always running a profit. Netflix, as we know, has gone on to enjoy tremendous success, while unfortunately, Blockbuster declared bankruptcy in 2010.10 If you are interested in some other mistakes Blockbuster made, check out Olivier Sibony’s thinker profile.

Christensen suggests that Netflix, unlike Blockbuster, was able to see beyond marginal costs and understand how the market had changed. They were able to tap into people’s desire to have movies for an indefinite period of time instead of trying to make customers pay for their habits. Christensen argues that Blockbuster should have tried to find alternative ways to sell their product instead of solely focusing on selling it to increase marginal revenue.

Indeed, Blockbuster should have looked at their overall costs — which were huge, mainly because of their brick-and-mortar business — and examined ways to reduce those. 10 By mailing in movies, and later transforming into a digital movie marketplace, Netflix was able to reduce their overall costs, not just their marginal costs, and ultimately come out as the victor.

As Christensen and his case study examine, although marginal costs can be an important factor in a business’ analysis, there are other variables that might need to take up greater prominence. Other prominent thinkers, such as American author Jay Samit, agree with Christensen.

Samit claims that “rather than wait for the competition to steal your business, every founder and employee needs to be willing to cannibalize their existing revenue streams in order to create new ones. All disruption starts with introspections.” 2 Tim Cook, the chief executive of Apple, similarly has said that “companies that get confused, that think their goal is revenue or stock price or something” need to “focus on the things that lead to those.” 2

Charity, Parochialism, and The Inefficiencies of Altruism

We often discuss marginal costs in reference to monetary costs, yet, more often than not, people’s marginal utility – the pleasure they obtain from spending their money – is influenced by a lot more than money. In this article, our writer William Phillips examines how people’s emotional factors contribute to inefficient charity donations. For example, in order to maximize utility, individuals will often donate small amounts of money to multiple charities, as they will then get multiple moments of feeling altruistic.