Does “the dog is behind the ball” mean the same thing as “the ball is in front of the dog”? Most people would say so. Perhaps you picture an adorable puppy on the left and a tennis ball on the right, and you think to yourself “Yeah, the puppy is in the same place regardless.”

Through the lens of cognitive grammar, however, these two phrases are not the same. While they may discuss the same situation, they are cognitively different.

Cognitive grammar is one of the major approaches to structure and meaning in grammar and linguistics.1 The idea is that language is grounded in general cognitive processes. Knowing a language is knowing a network of symbolic units where sounds are paired with meanings. Essentially, cognitive grammar is exactly what it sounds like: it reduces all grammar into cognitive concepts, focusing on the minds of speakers.

Semantics: The study of meaning in language

Volume 1: Theoretical Prerequisites was published in 1987, and explored the original hypothesis that grammar can be deconstructed into cognitive patterns.2 Volume II: Descriptive Application was published in 1991, and elaborated on the ways that different cognitive grammar concepts can be applied to linguistics.3

Langacker believed that all linguistic structures are meaningful, even seemingly abstract categories like nouns or past tense.2 These structures could be fully described in cognitive and perceptual terms, not as distinct entities. Lexicons (the words we know) and grammatical rules exist on a continuum from concrete, meaningful symbols (i.e. “chair” and “dog”) to schematic, generalizable symbols (i.e. subjects and clauses).

Langacker believed that language is usage based: speakers are knowledgeable about symbolic units because we make connections across different cognitive events, allowing our past experiences to inform our current understanding.1  To illustrate the cognitive and perceptual aspects of grammar, Langacker liked to use images.2 The image here, for example, distinguishes between the infinitive “to walk” on top, and the noun “a walk” on the bottom. 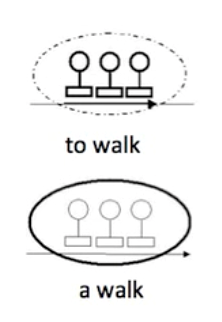 Ultimately, Langacker believed that there are only three components that make up grammar:2

To expand on the three components of grammar, Langacker detailed many different concepts. One concept was the idea that all expressions evoke a frame, known as a base, and highlight a certain part of the frame, known as the profile.2 The expression “my uncle” evokes the frame of a familial network, and profiles where an uncle falls in that network. Without prior knowledge of what an uncle is or how familial networks work, you would not understand the expression “my uncle.”

Finally, linguistic units are another important concept proposed by Langacker. These units are a thoroughly mastered cognitive structure: they are the cognitive routines we engage in when we use language.2 This sounds abstract, so, to illustrate, let us think about the act of golfing. Golfing is a multi-step process. First, a club needs to be picked. Then, it needs to be lifted to a certain degree. Finally, it needs to be swung with a certain amount of force to send the golf ball to a desired location.

Imagine you were learning how to golf. At first, you would need to practice each of these individually: you’d need to learn the right grip; learn the right angle to raise your club; and learn how much oomph you need to add to the swing. But after a while, all these steps become part of a single activity — golfing. Per cognitive grammar, language works the same way. Putting sentences together is like learning how to golf: instead of putting together how to grab, angle, and swing a ball, we put verbs, tenses, and subjects, and more together. Over time, this becomes a single cognitive routine we use to create sentences.

Since its development, cognitive grammar has offered a new way of considering the construction of language.1 It has been applied to educational contexts, especially in the case of teaching verb tenses to foreign English language learners.4 Cognitive grammar’s emphasis on the meaning of grammar and the use of pictorial representations has been effective in helping build learners’ grammatical knowledge, compared to traditional instructional methods that focus on distinct components.

Concerns have been raised regarding the complexity of cognitive grammar, impacting its accessibility and thus its usefulness.7 The many terms and concepts involved in cognitive grammar can be more difficult to understand, than, for example, Chomsky’s generative grammar. Langacker himself suggests that his two-volume work is aimed at advanced undergraduate and beginning graduate level studies, for those who already hold a linguistics background.1 If anything, Langacker described his books as ideally suited for a two term graduate course. Other linguists have offered interpretations of his studies and tried to make it more accessible, but it can still be a difficult framework to approach and apply.7

As humans, language is infused into almost everything we do, so it should be no surprise that linguists wanted to study it from a cognitive approach. But what if language was also important in how drone use is justified? Take a look at this article to explore the power of language in terms of moral disengagement, and the role it plays in the issues surrounding drone policy.