WANT TO WORK TOGETHER ON A RELATED PROBLEM?

Effective interventions start with a nuanced understanding of how decisions are made. Our mission is to help large organizations be better and do better, using behavioral science.

Learn about what we do

Men’s lack of precision when aiming into the toilet increases the cleaning costs of public washrooms; Amsterdam’s Schiphol Airport was no exception.1 The airport wanted to improve urinal aim to reduce total cleaning costs. As a simple and inexpensive way to achieve such goals, Schiphol Airport introduced its urinal flies.

By etching an image of a fly inside every urinal, Schiphol Airport hoped to nudge men to aim at the fly improving overall aim.1 Implementing this physical design change reduced spillage by 80%, and the budget for cleaning public toilets by 8%.

WANT TO WORK TOGETHER ON A RELATED PROBLEM?

Effective interventions start with a nuanced understanding of how decisions are made. Our mission is to help large organizations be better and do better, using behavioral science.

Learn about what we do

Rating = 3/5 (Easy to implement, data collection methods could be improved)

The Nudge: A small fly decal placed in the bowl of each urinal 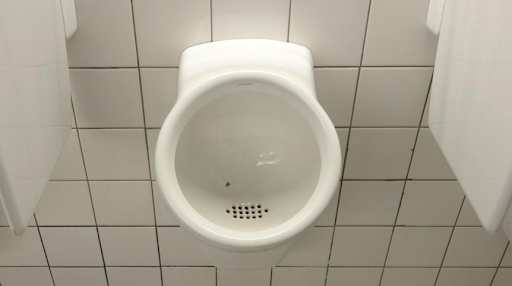 Physical design change: A type of nudge that focuses on changing the physical environment to facilitate performance of a desired behavior or to create barriers for an undesired behavior.

Urinal designers have long been interested in finding a solution to the issue of splashback, a result of poor precision when aiming into a toilet bowl.1 Urine is acidic, so splashback can damage surface appearances.2 Urine can also draw soils and dust to it while wet, accumulating on floors and walls, which allows the areas to house bacteria and other pathogens. Overall, splashback presents a difficult challenge for custodial teams working in public spaces, which is amplified when poor aim results in direct spillage. Plus, we’re all familiar with the smell.

The whimsical world of urinal flies

The “urinal fly” is exactly what it sounds like: the image of a small fly is etched into the urinal bowl.1 All urinals in the Schiphol Airport had the fly in the same position, just above the drain and skewed to the left. (People familiar with this design have noted that it doesn’t necessarily have to be a fly—users would direct their urine at other images too.)

The urinal fly was introduced by Aad Kieboom and suggested by Jos van Bedaf, who was the manager of the cleaning department.1 Van Bedaf was first exposed to urinal targets while in the army in the 1960s. His experience with physical design change, specifically in the context of urinal aim, caught the attention of management. After that, it wasn’t difficult to get approval for urinal flies and move forward with the project.

If you think that seeing a fly would evoke unsanitary images, you’re not alone.1 In fact, that’s what typically comes to mind for the individuals who visit the washroom. However, people are more likely to aim at something they dislike. If the fly was replaced with a delicate image (i.e. a butterfly), users may feel guilty aiming at it. If the fly was replaced with a scary image (i.e. a cockroach), users might get scared and avoid the urinal altogether. The fly is a compromise: it’s universally disliked but it doesn’t elicit fear, nudging users to aim at it and thus reduce splashback.

Schiphol Airport’s urinal fly exemplifies the SaniFOAM framework, which emphasizes focus, opportunity, ability, and motivation in the context of sanitation.3

Schiphol Airport’s urinal files can easily be implemented into any public or private washroom. In fact, there is now a website that creates and delivers a host of urinal stickers, including a fly decal.

In terms of effectiveness, it is unclear exactly how much the fly targets reduce cleaning needs.1 Some claim it can reduce splashback by up to 80%, and Sphinx, Schiphol Airport’s urinal manufacturer, says that the fly has led to savings in cleaning costs by a minimum of 20%. Schiphol Airport is often cited as the source for studies on spillage reduction, but no studies have been conducted to corroborate these results.

All effectiveness rates have been based on observational estimates, with no testing methods. Kieboom estimates that the savings in cleaning costs are closer to 8% – rather than 20% – assuming the 80% spillage reduction is accurate. This is because the total public washroom space that requires cleaning can be divided into approximately 20% for general spaces, 40% for men’s rooms and 40% for women’s rooms. Of the men’s 40%, a maximum of 25% is reserved for urinals, which ends up being only 10% of total public washroom space.

So, while the intervention is cheap and widely applied, its effectiveness might be lower than initially advertised.

Evidence based strategies for washing your hands

Urinal splashback is not the only sanitation issue in public washrooms. Another common issue is that some people often leave the washroom without washing their hands. In this piece, Karine Lacroix documents how another behavior change framework, EAST, can increase hand washing in public spaces.

Men’s urinal aim is far from being the only aspect of public sanitation that can be targeted by behavioral science strategies. The Decision Lab was recently approached by Aerosan and the Government of Nepal to promote better sanitation practices, particularly as it relates to gendered public toilet access. Request our case study if you’re interested in learning how we were able to help!